Have a Tesla or another electric vehicle that needs charging from your home ? Being a clean, neat skilled electrician that knows what he’s doing, I can install your E.V.S.E  such as Tesla High Power  Wall Connector (HPWC) or NEMA 14-50 outlet at your home (not to mention other brands such as Juice Box, Charge Point and Clipper Creek) or refer you to the best electricians in the area to do it.  With HUNDREDS of EV Chargers installed under my belt as an E.V.S.E.-focused ELECTRICIAN in the Washington D.C. area I know what‘s going on and you will get top-quality work. As a skilled E.V. Installer with years of experience doing this day in and day out  with the D.C. area’s best electrical contractor (HavePower Inc.), you will be totally satisfied at the finished product for your in-home Level 2 240V Electric Vehicle charging needs. Quality Tesla EV installation in Virginia, Maryland and DC.

For a Job Quote see details below

EVSE (electric vehicle supply equipment) is my electrical focus in the Washington D.C. area. Whether you want a 240V Nema outlet next to your panel in your garage or new Tesla charger in your garage I could be your guy if you want it looking nice and neat. I’ll work under the homeowner who has their permit. I stand by my work and always comply to installation code and standards.

Panel in Garage with Nema 14-50 outlet

This is the least expensive option since I don’t have to work inside the house and the electrical panel is already in final proximity. The Nema 14-50 (50amp breaker with 40 amp continuous draw using #6 copper wires) provides you with the best value for charging. Simple, easy and effective.

Panel in Garage with Tesla HPWC or Other Charger

Your electrical panel is already in final proximity there is no work inside your house. If you already have purchased your Tesla High Power Wall Connector or other manufactures charger I can install it where you would like it.

Panel not in Garage

This is a common scenario where your panel is most likely in your basement (or in some area in your house) far away from your car. No problem because I have mastered the art of fishing and pulling wire through your houses (with minimal holes) to your final destination.

If you want your charger outside and attached to a side of your house then this is not a problem. All outside installation complies with Nema 3R weatherproof standards.

Pictures of Completed E.V. Charging Installs Shown in Tabs Below. 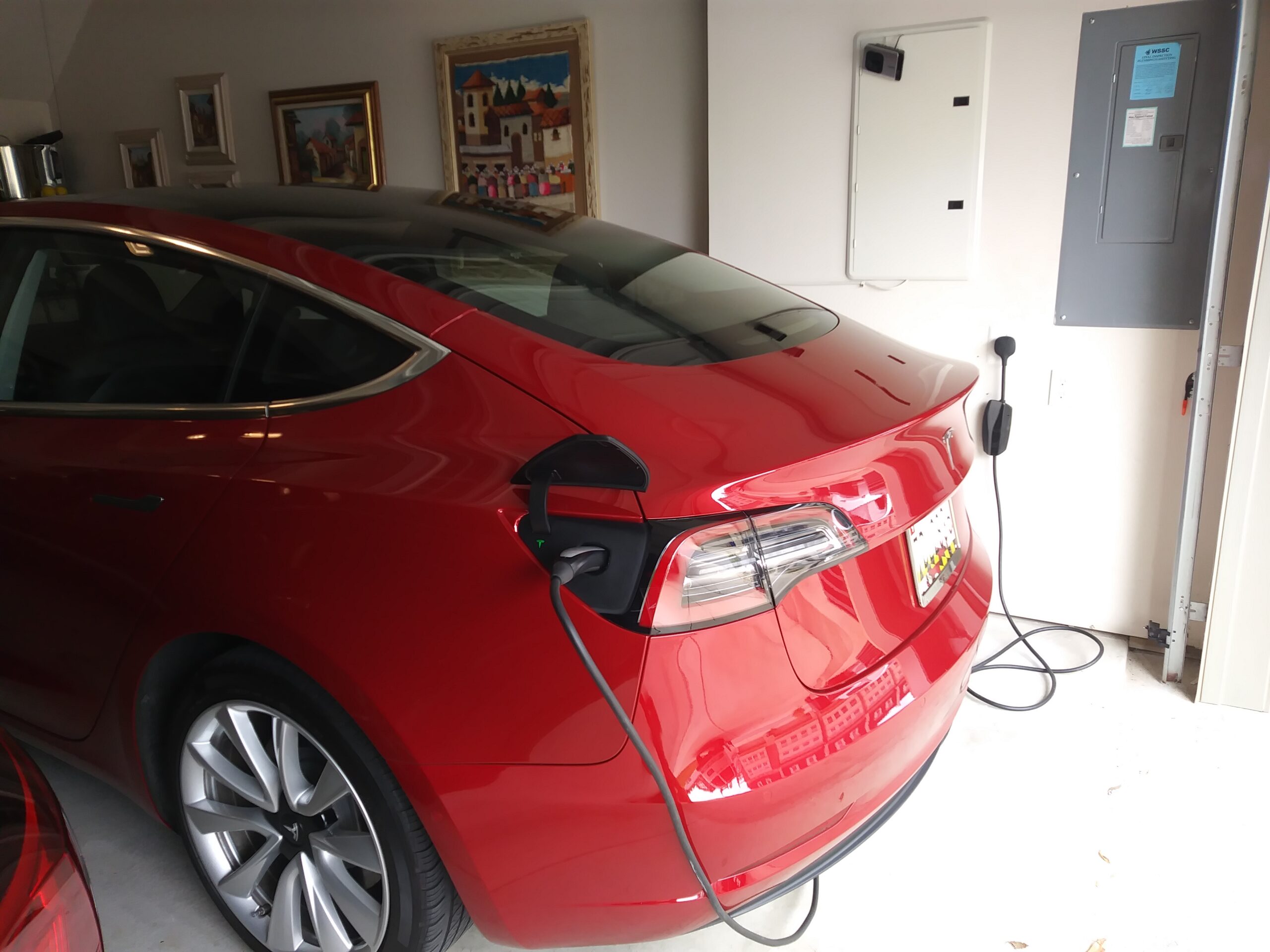 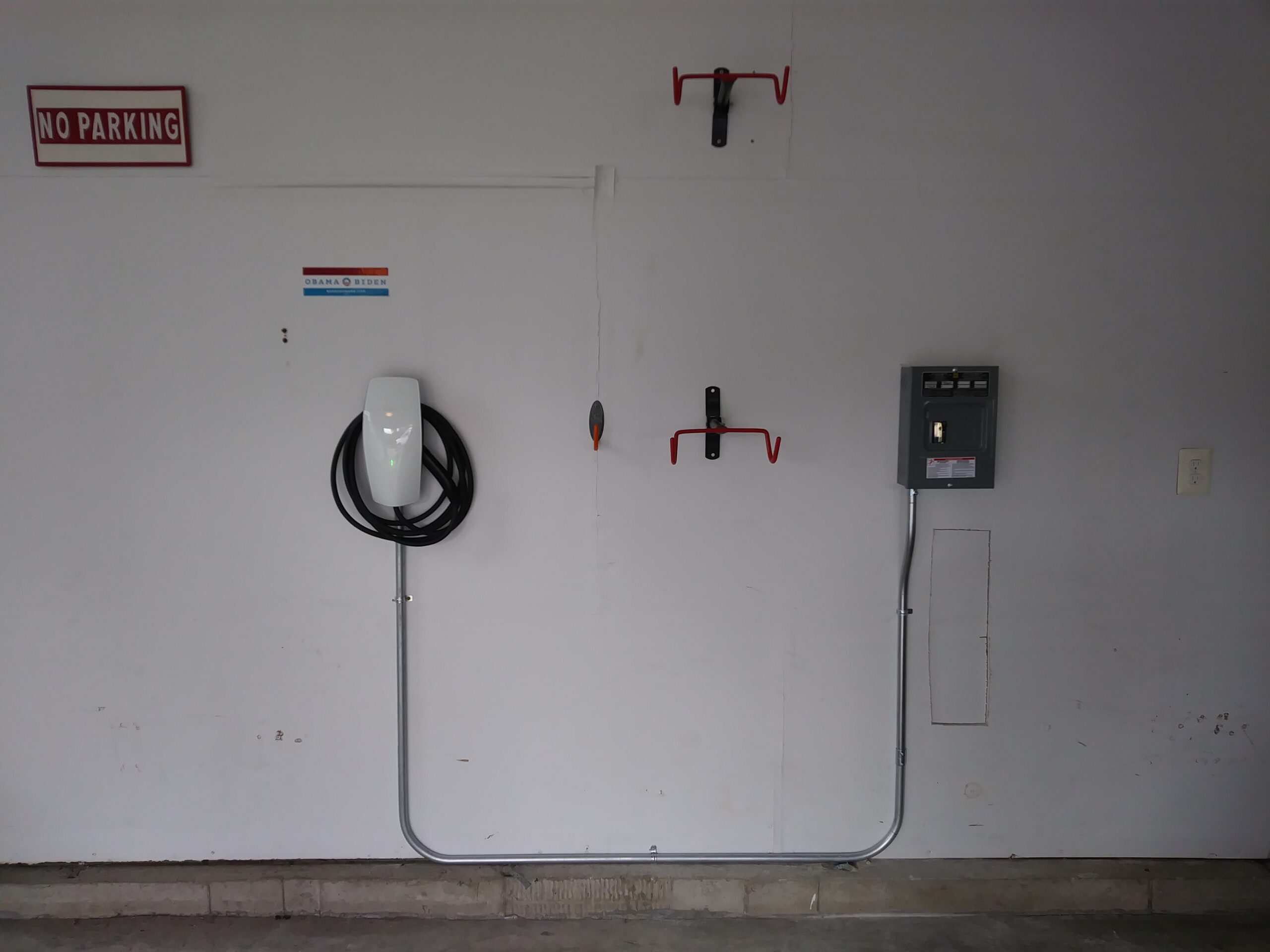 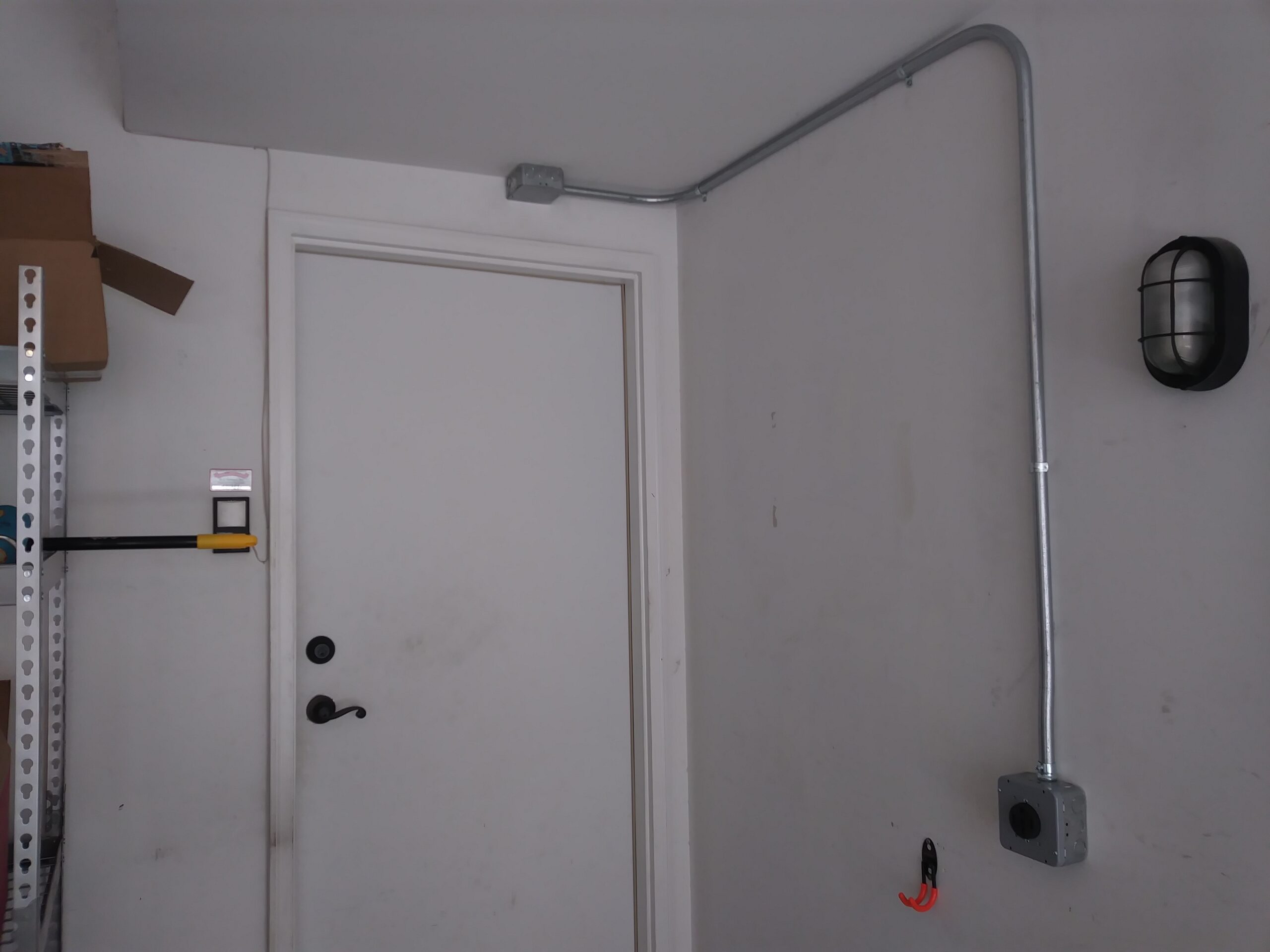 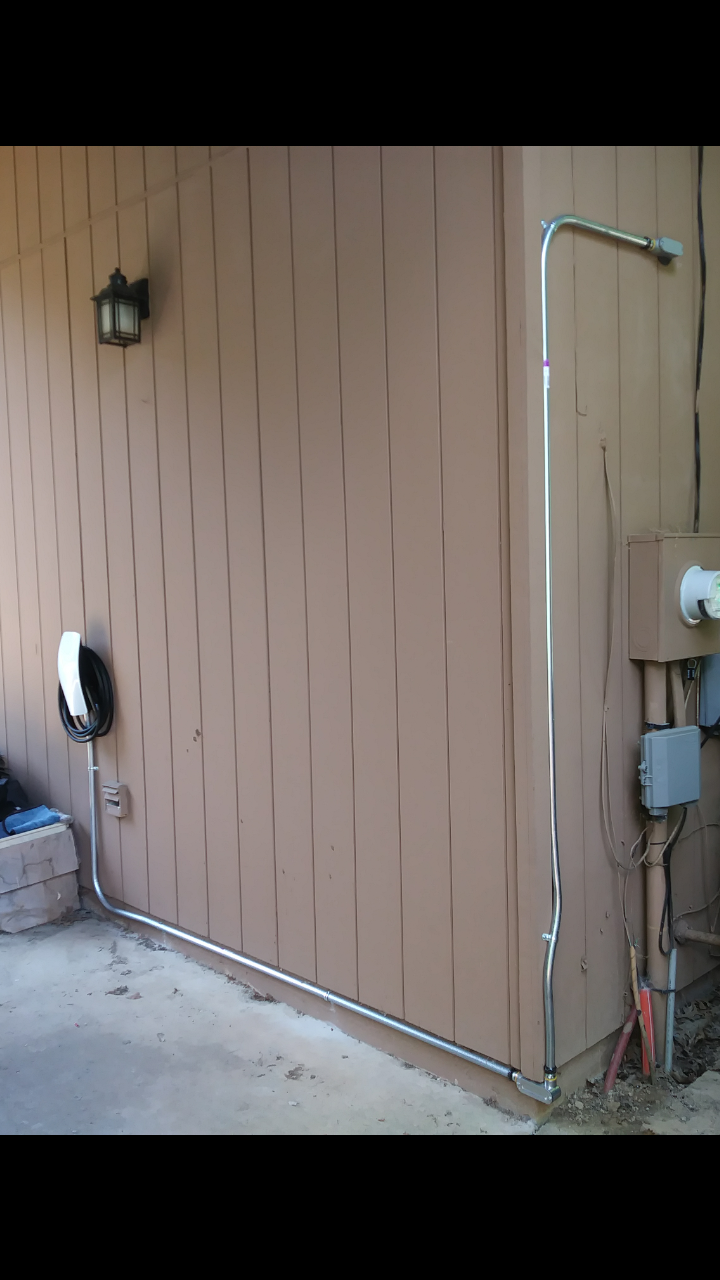 In the carport is another Tesla HPWC 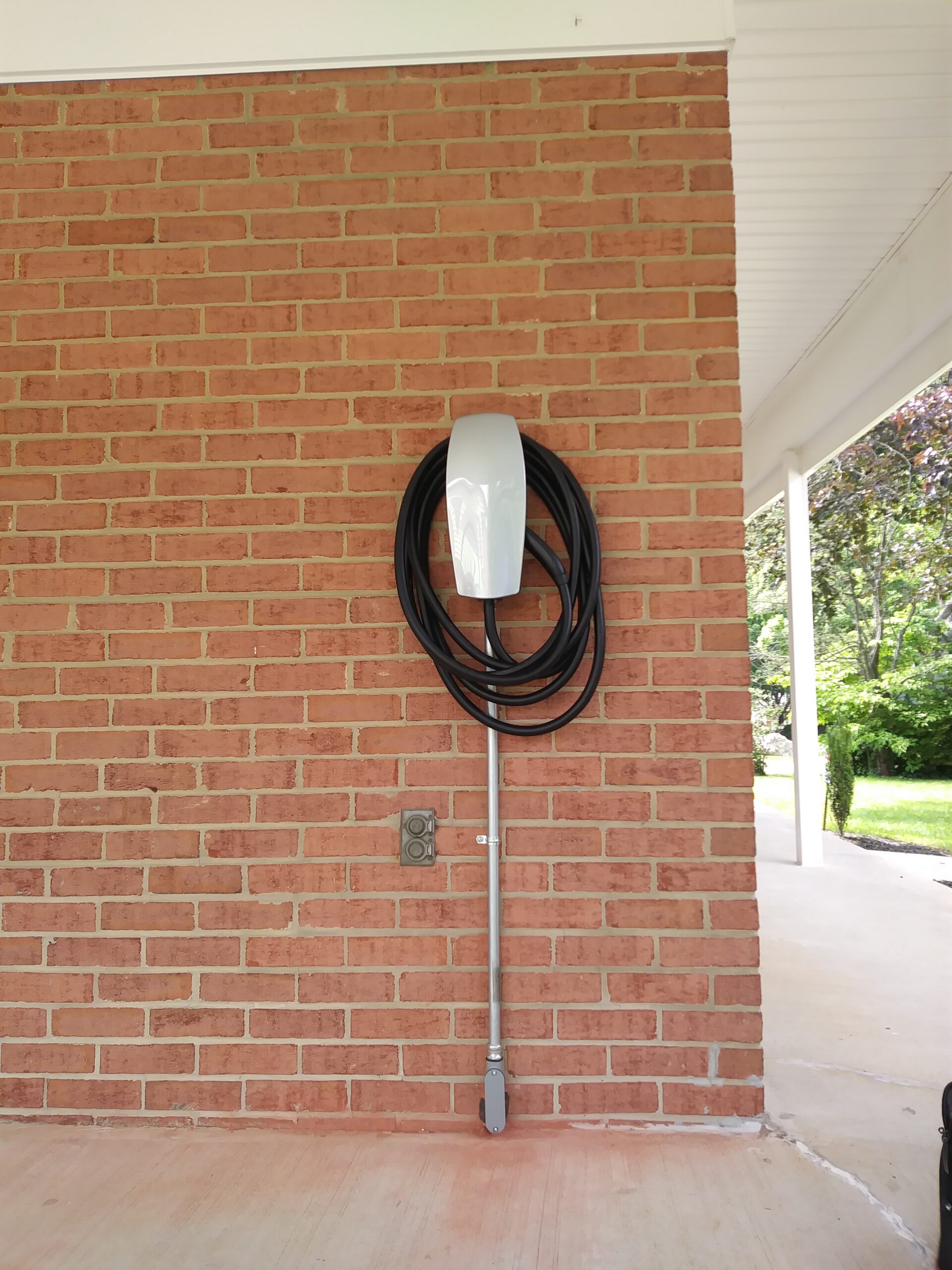 A ChargePoint EVSE plugged into a Nema 14-50 outlet. 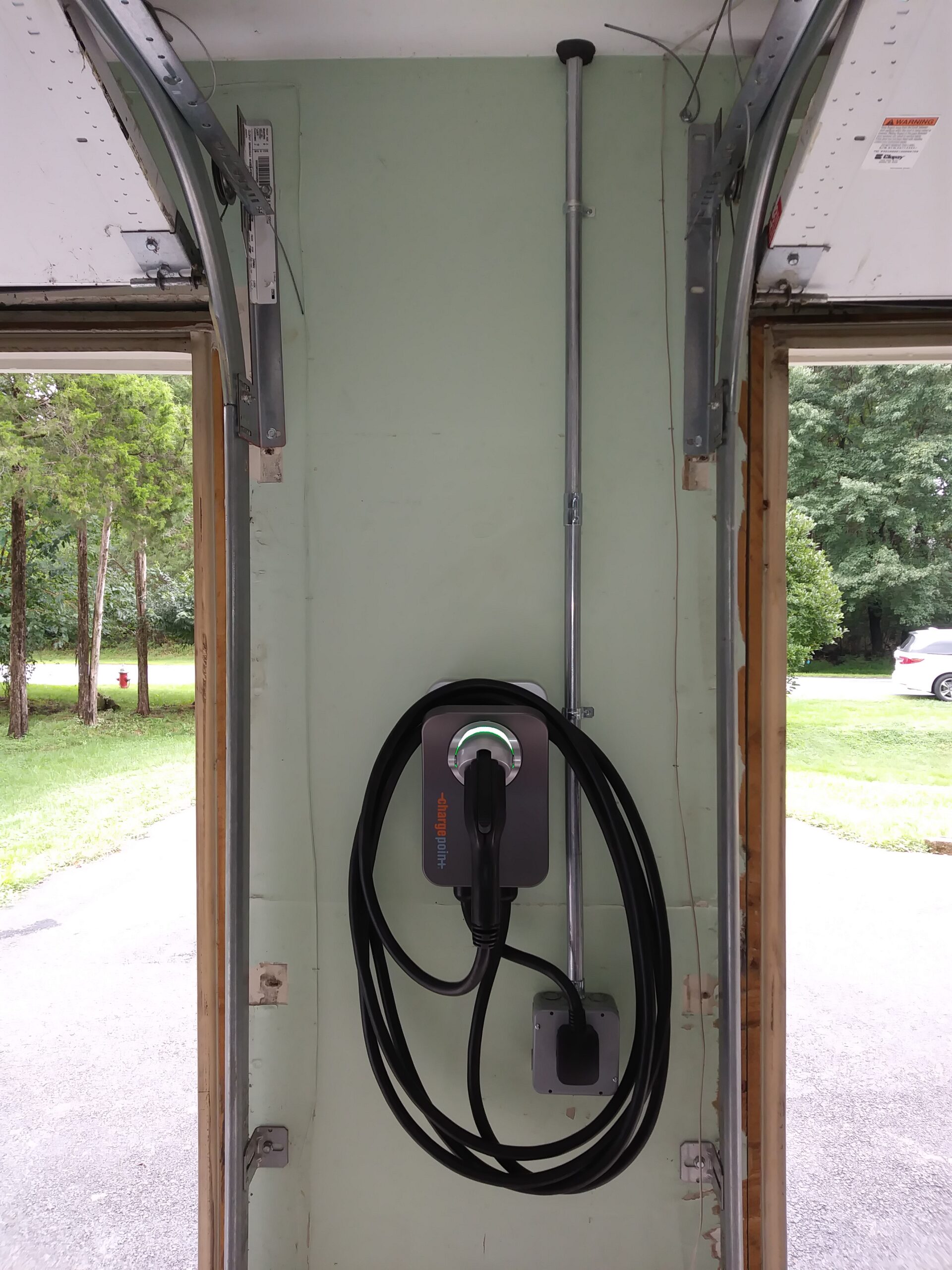 A Gen 3 Tesla HPWC in the garage in proper conduit. 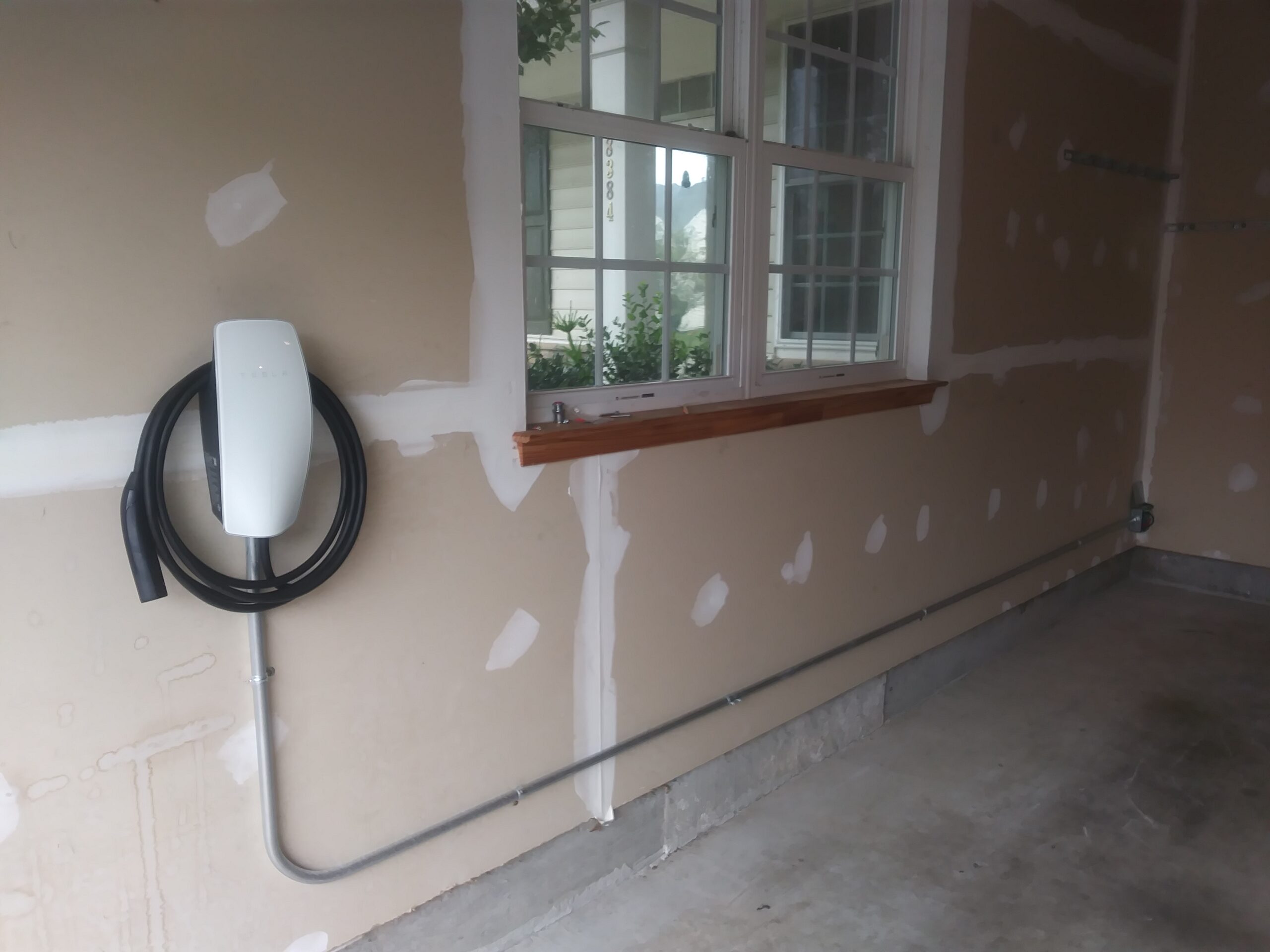 You can peel the sticker of this this one and be the first to see the shine from a Gen 2 Tesla HPWC ready for maximum charging at 80Amps enlcosed in 1″ conduit. 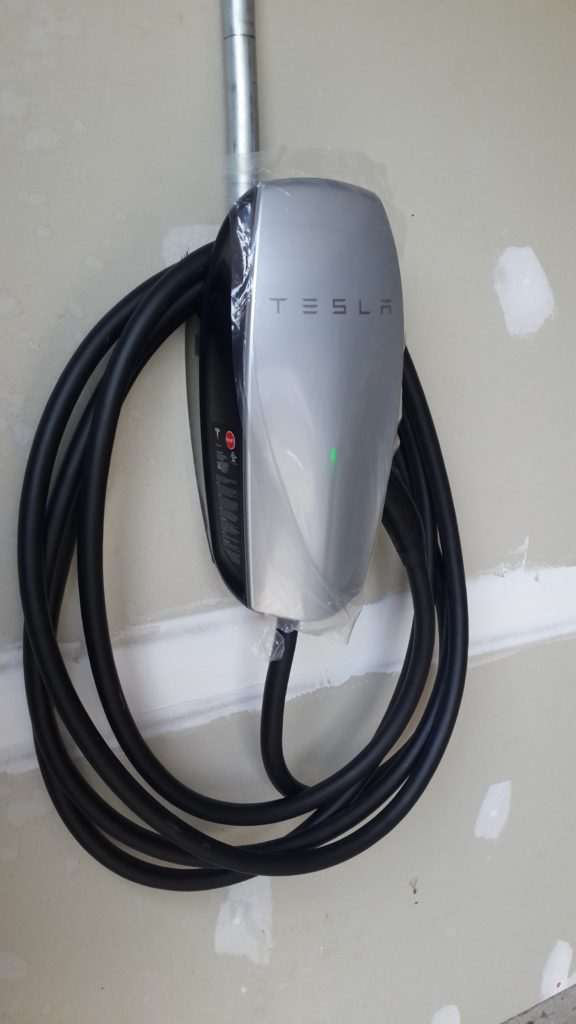 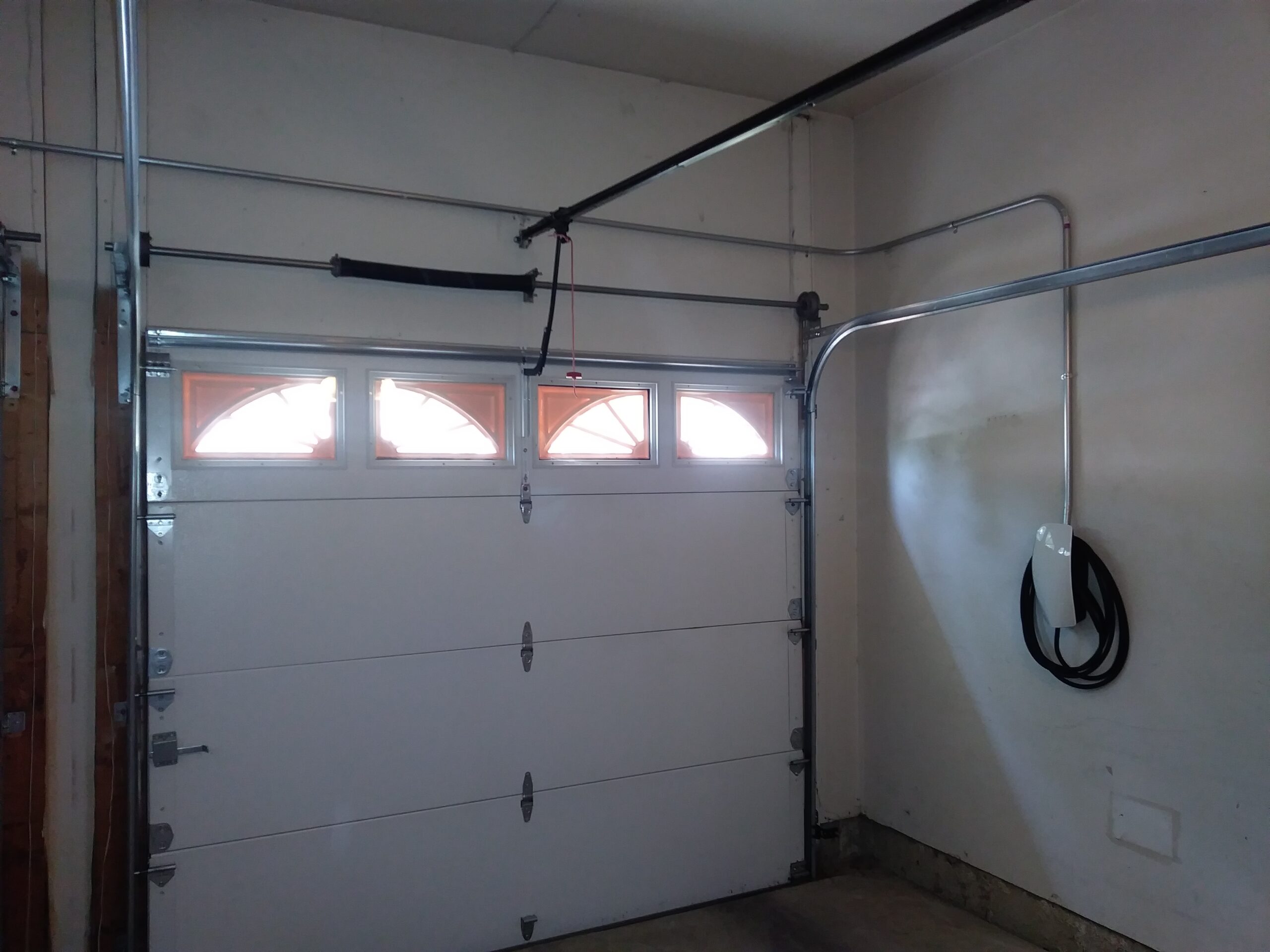 Generation 2 HPWC’s dual charging (load sharing) at 100Amps. Meaning the any single car will charge at the maximum rate with one charger until another car is also plugged to the other charger the load will be shared between the two. Per code, this type of installation requires a service-disconnect switch within sight. 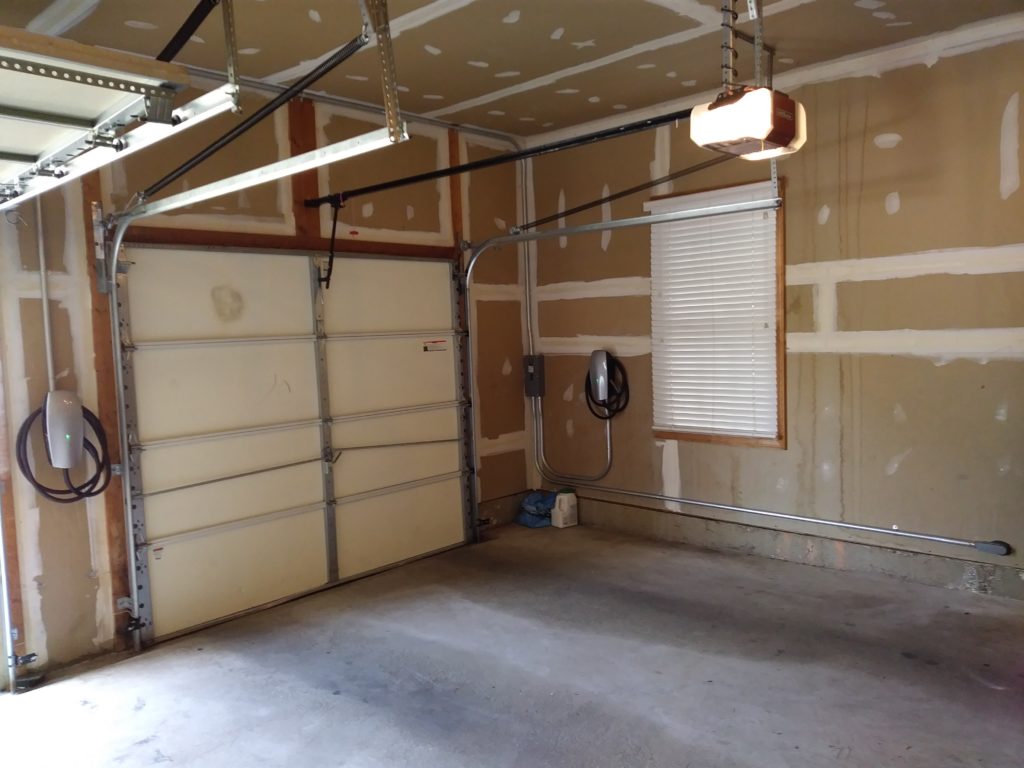 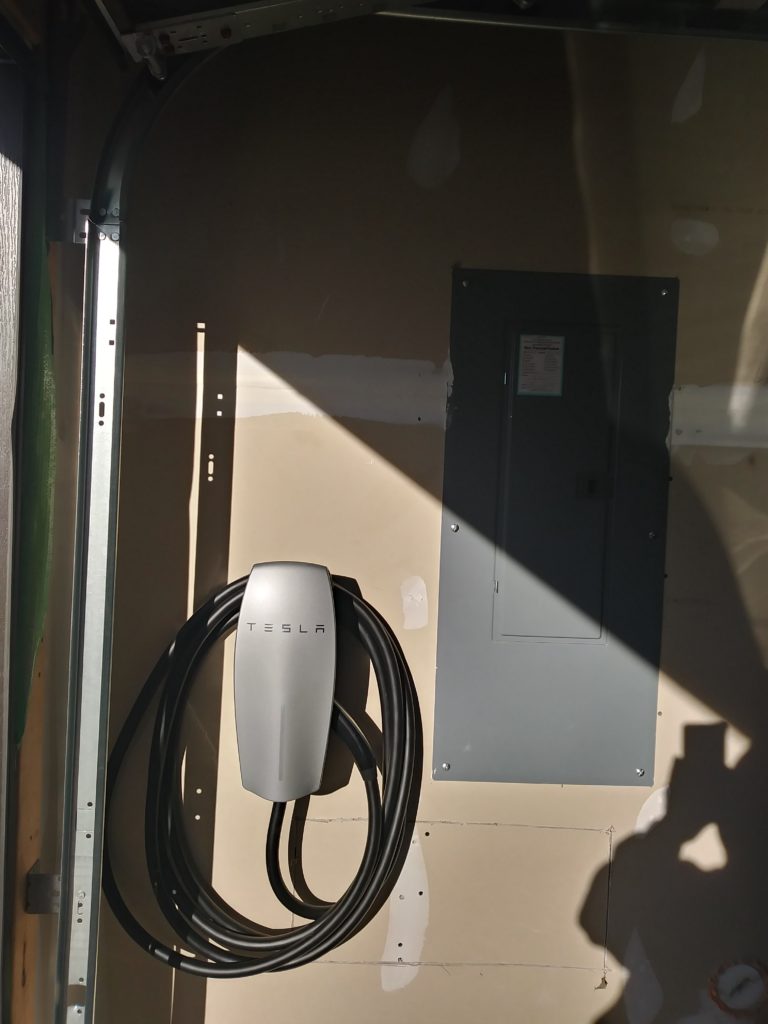 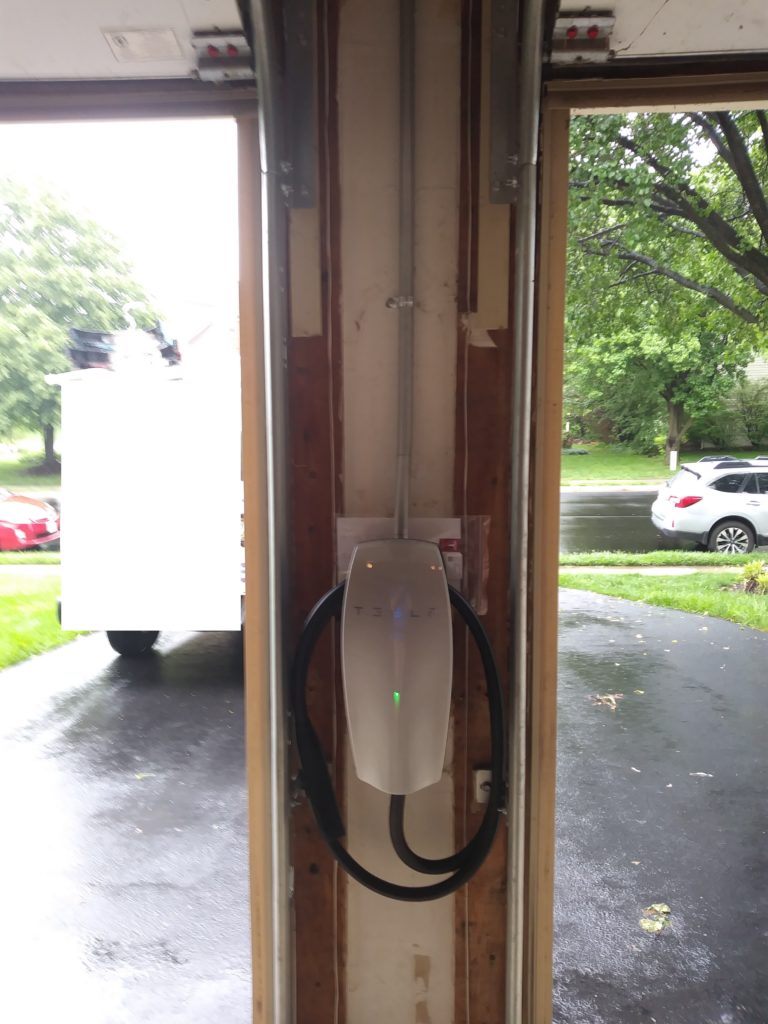 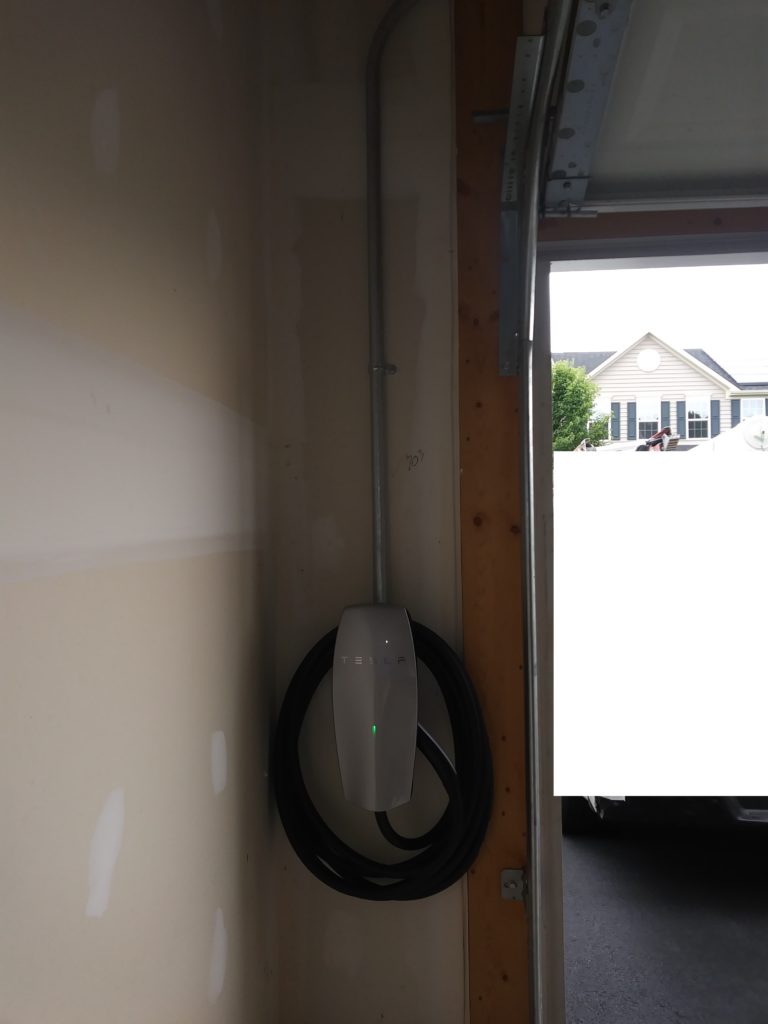 The easiest and least costly option is having a NEMA outlet directly under your panel in the garage. 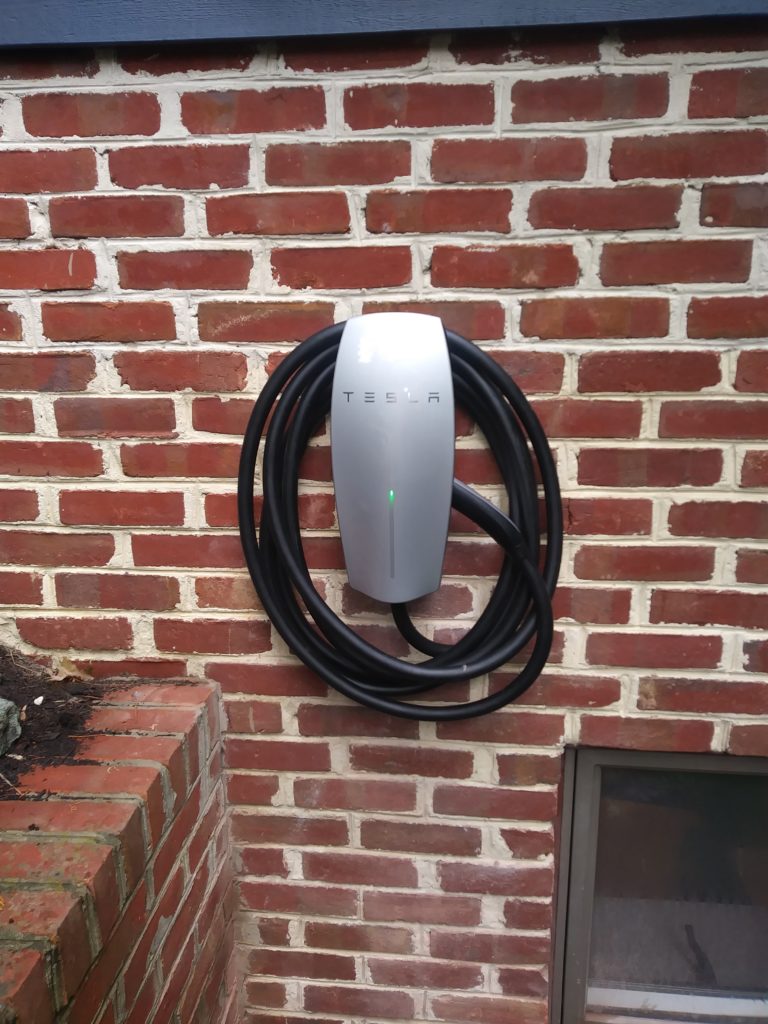 A lovely installation on the house right up against the driveway. 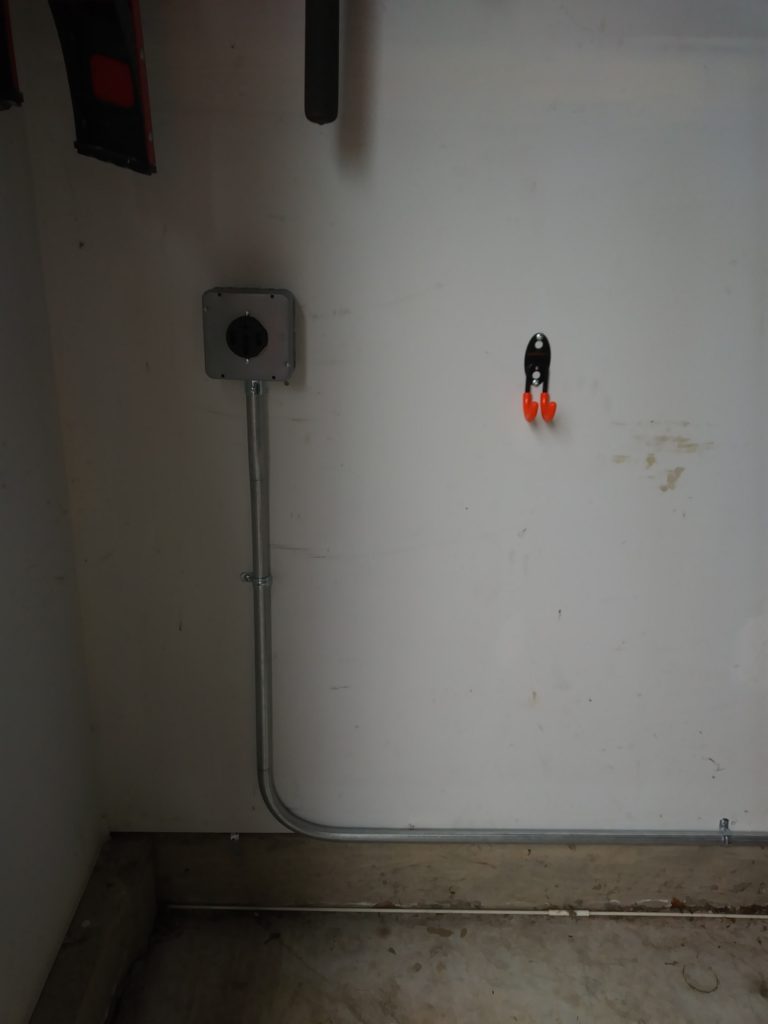 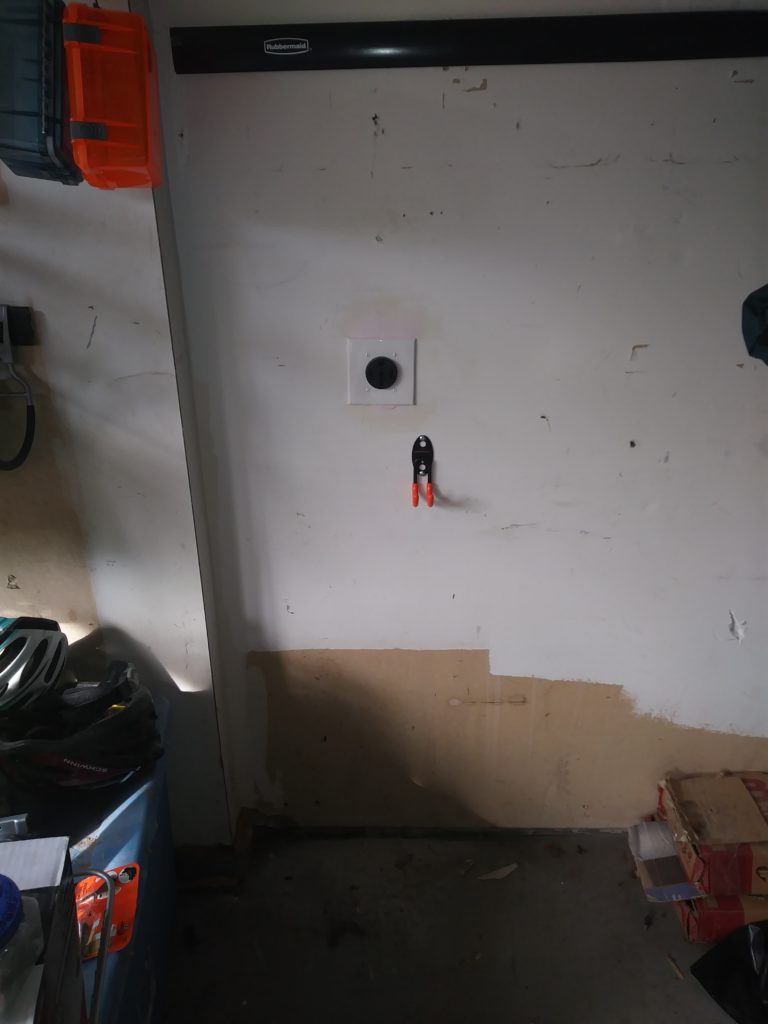 Nema outlet Recessed in the wall 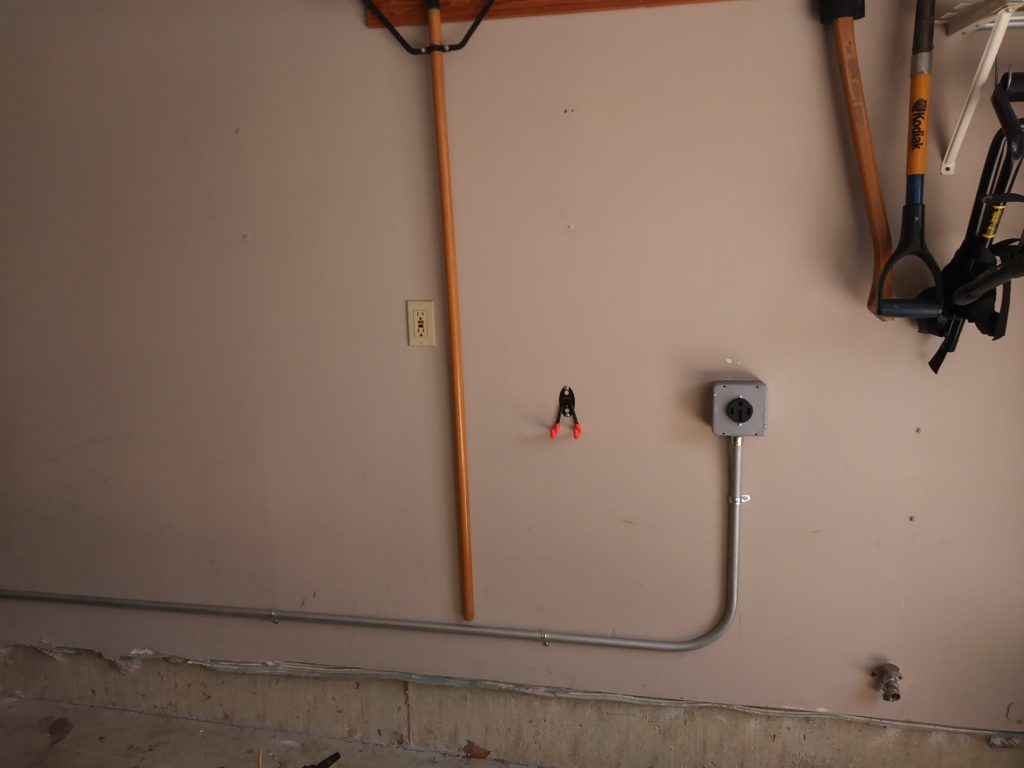 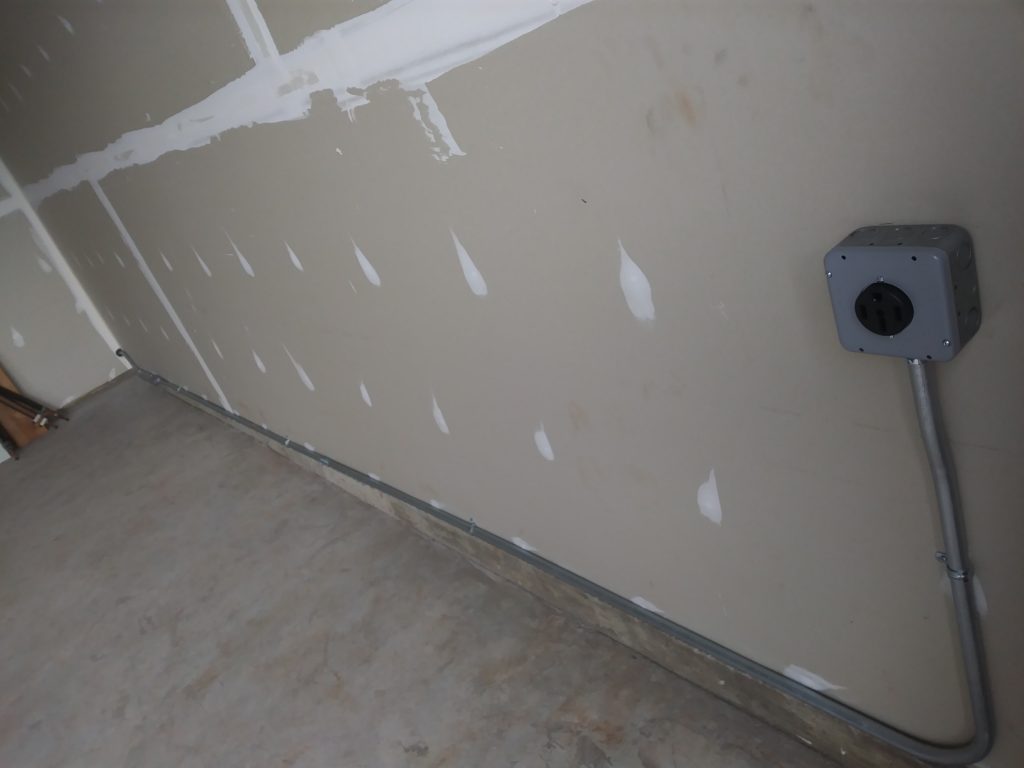 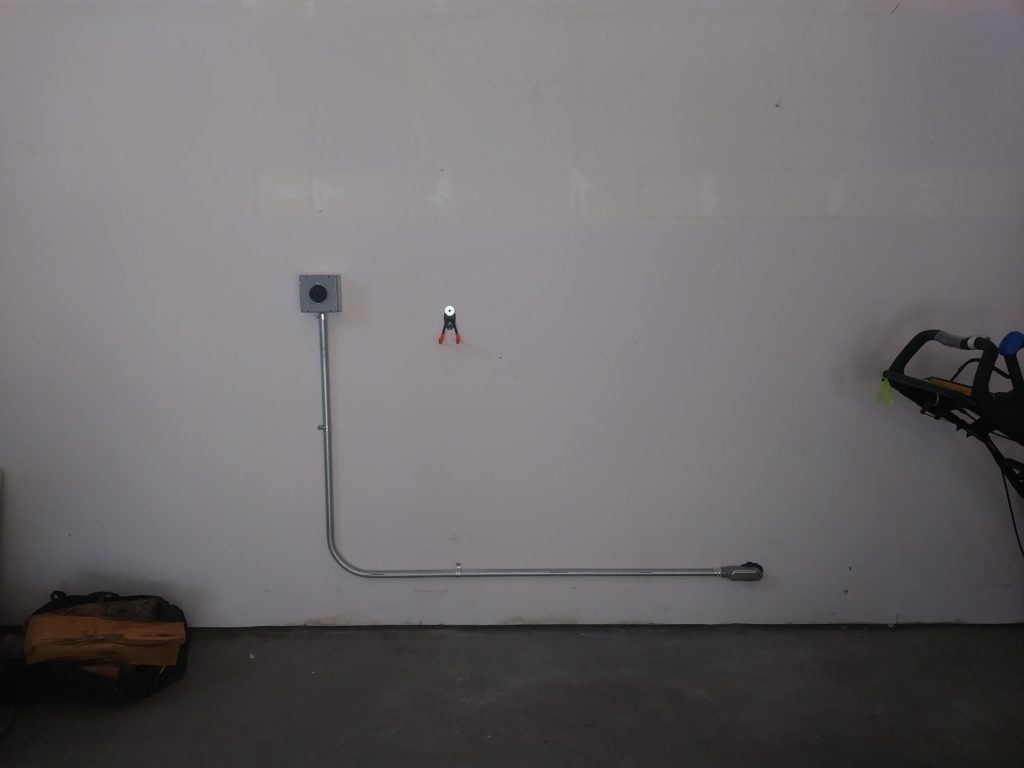 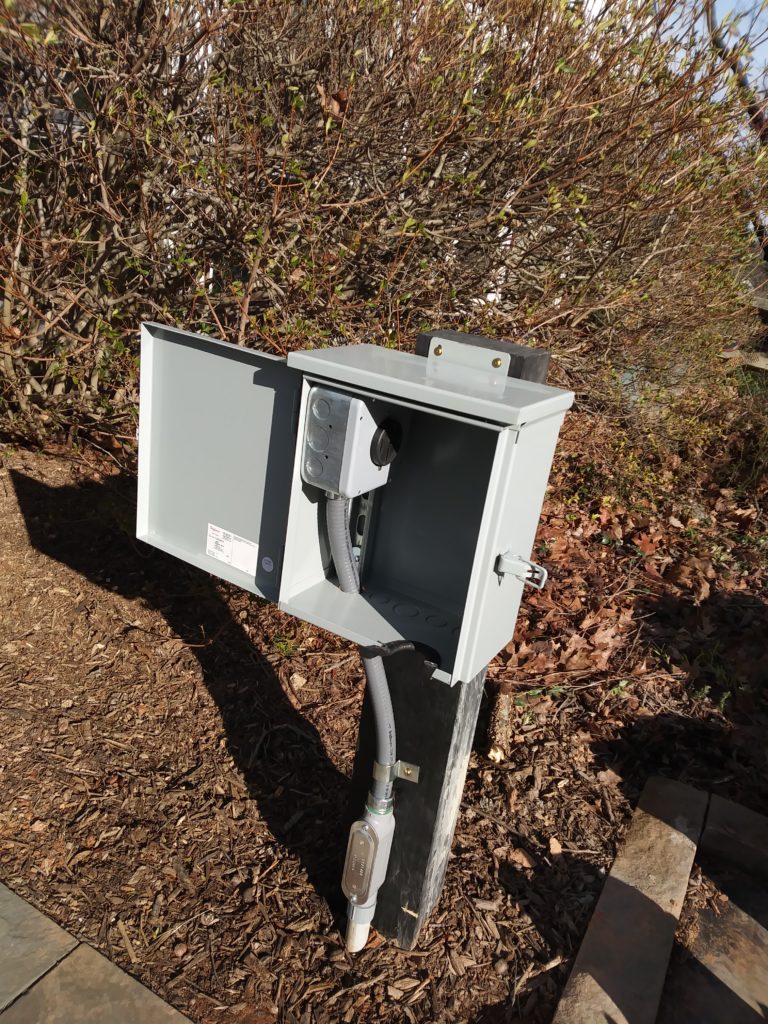 A super-sized weather-proof enclosure on a post at the edge of the driveway in the customer’s front yard. 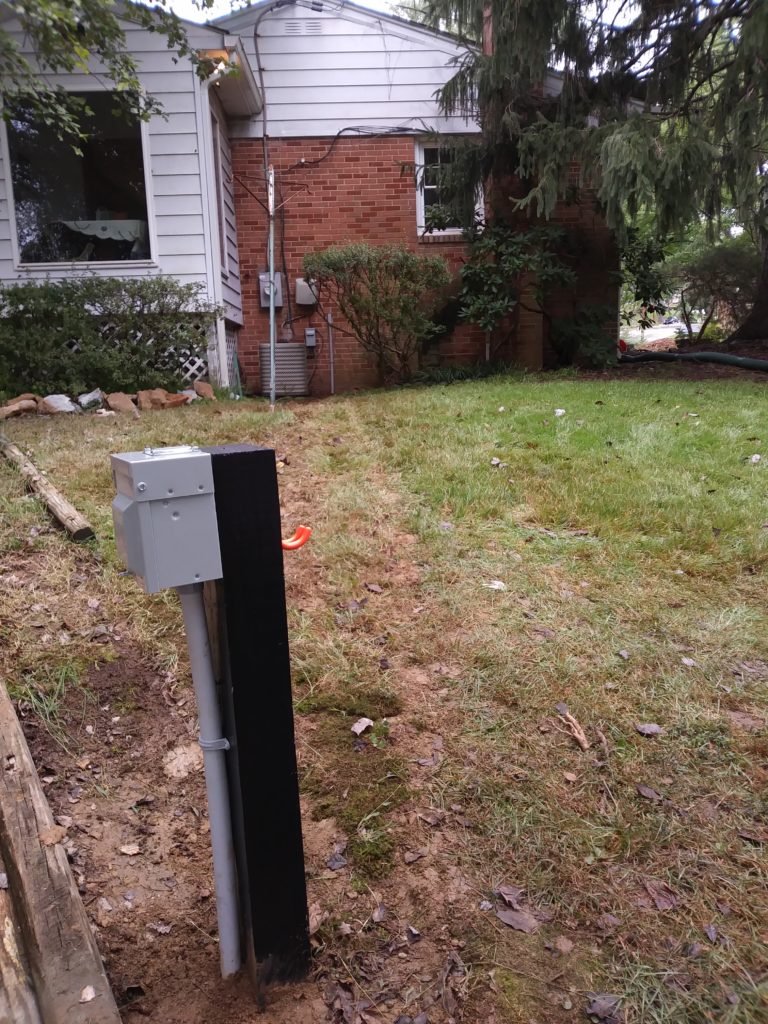 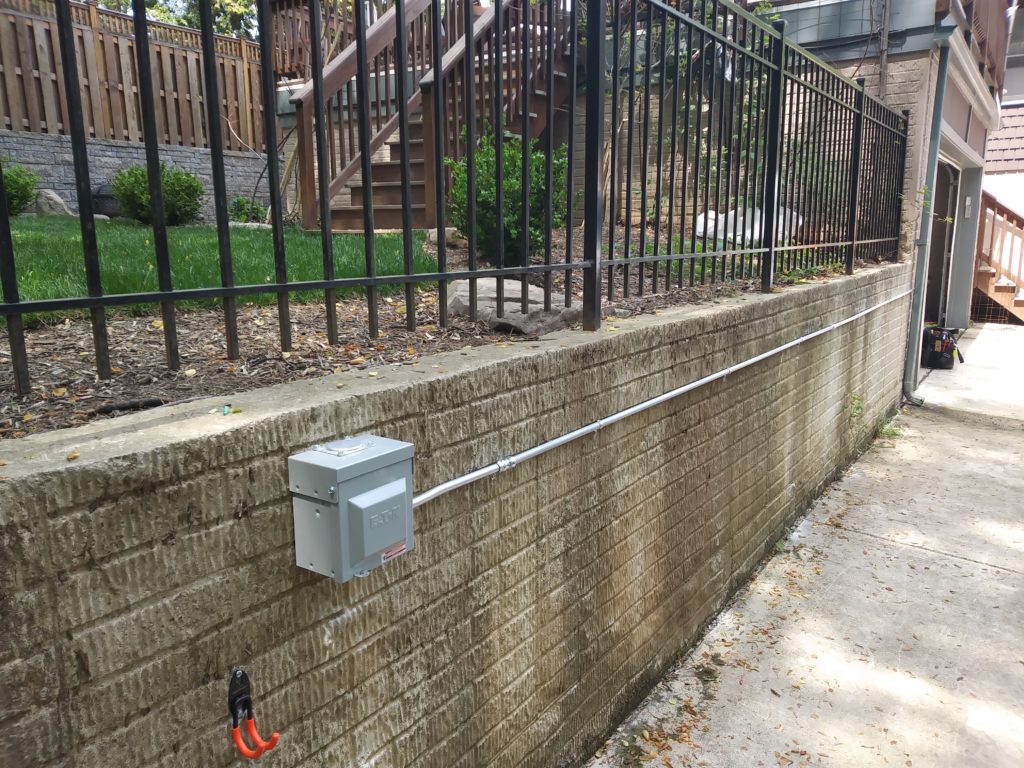 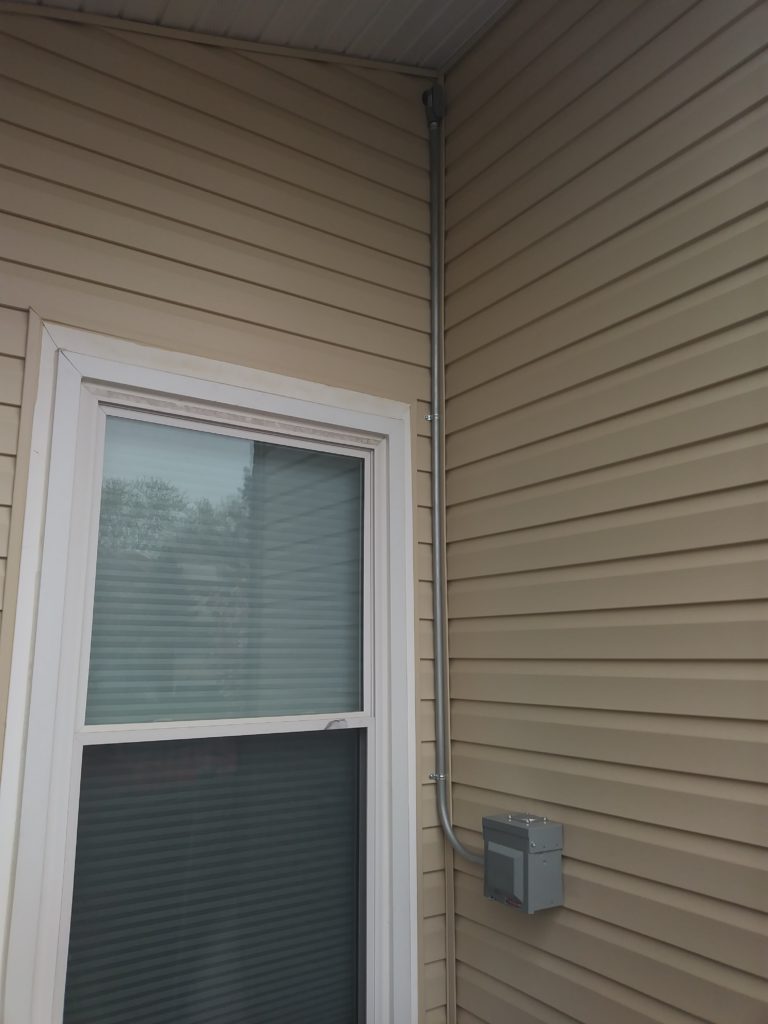 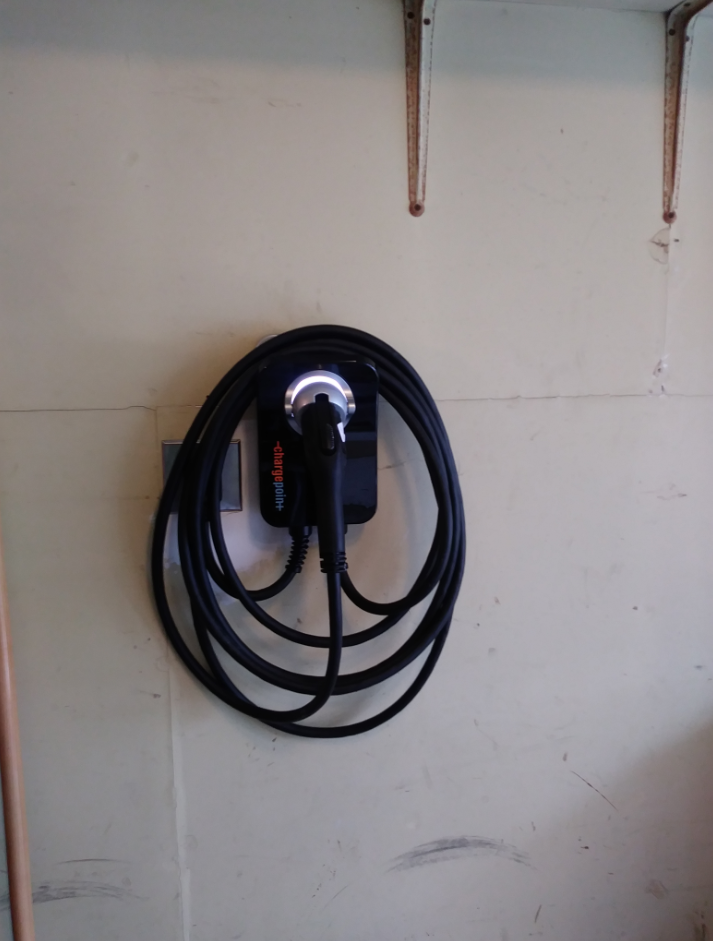 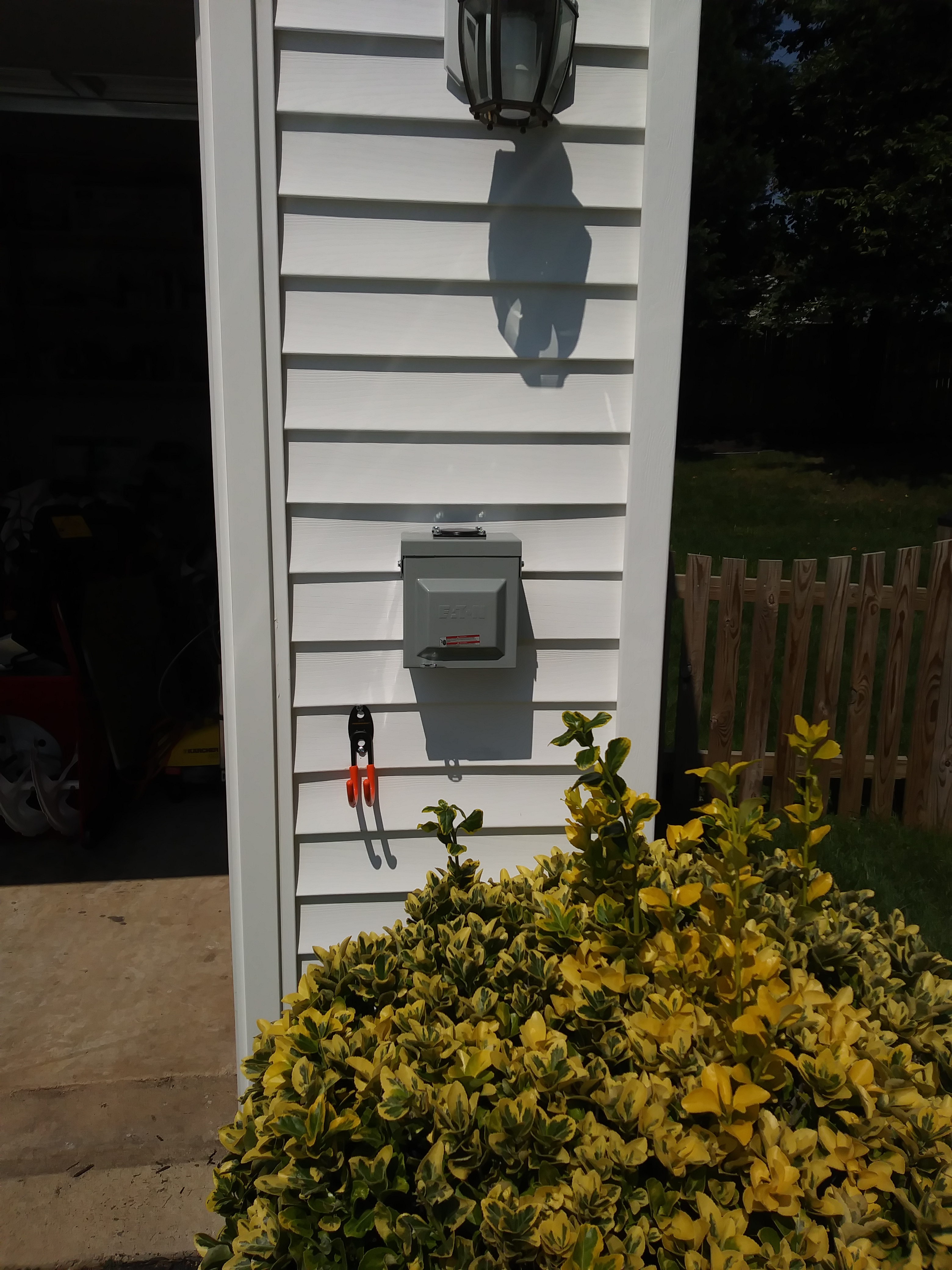 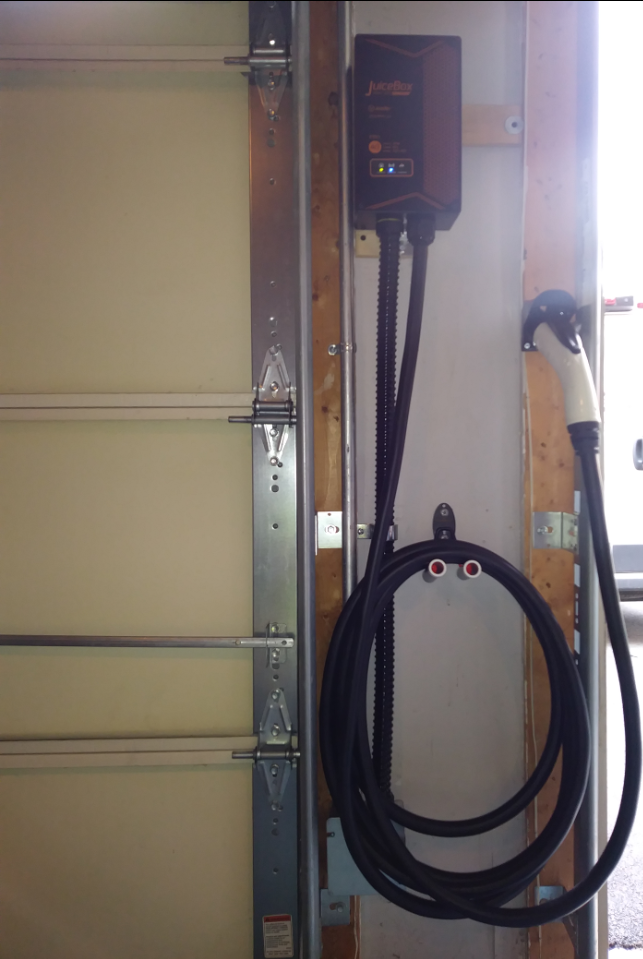 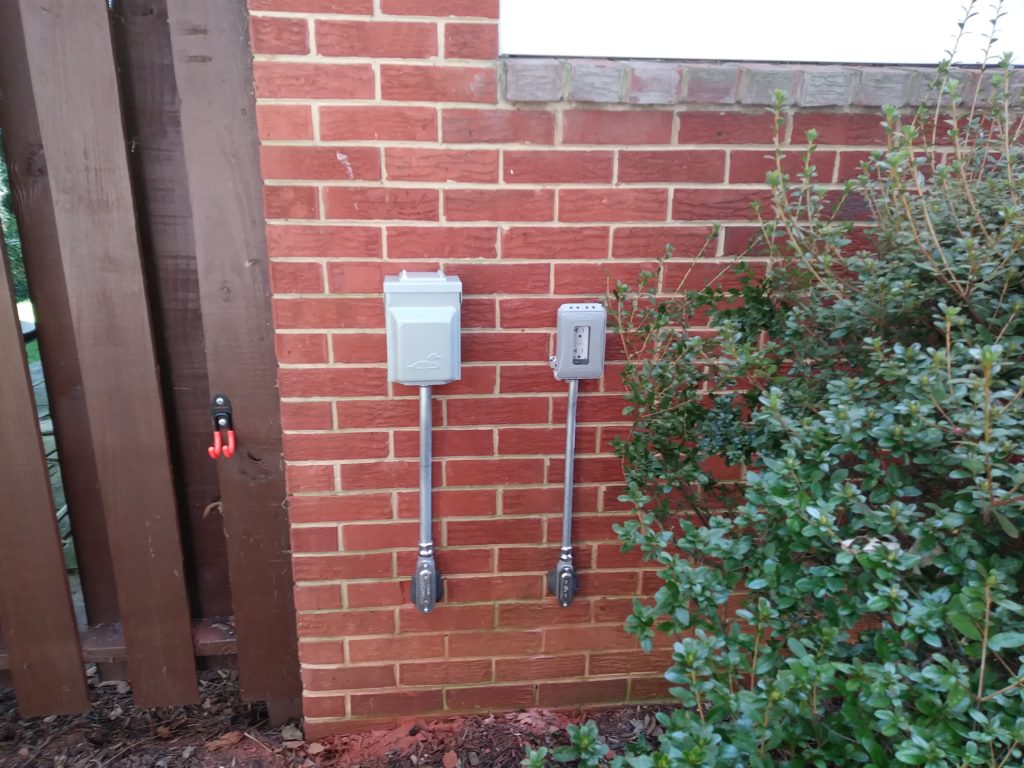 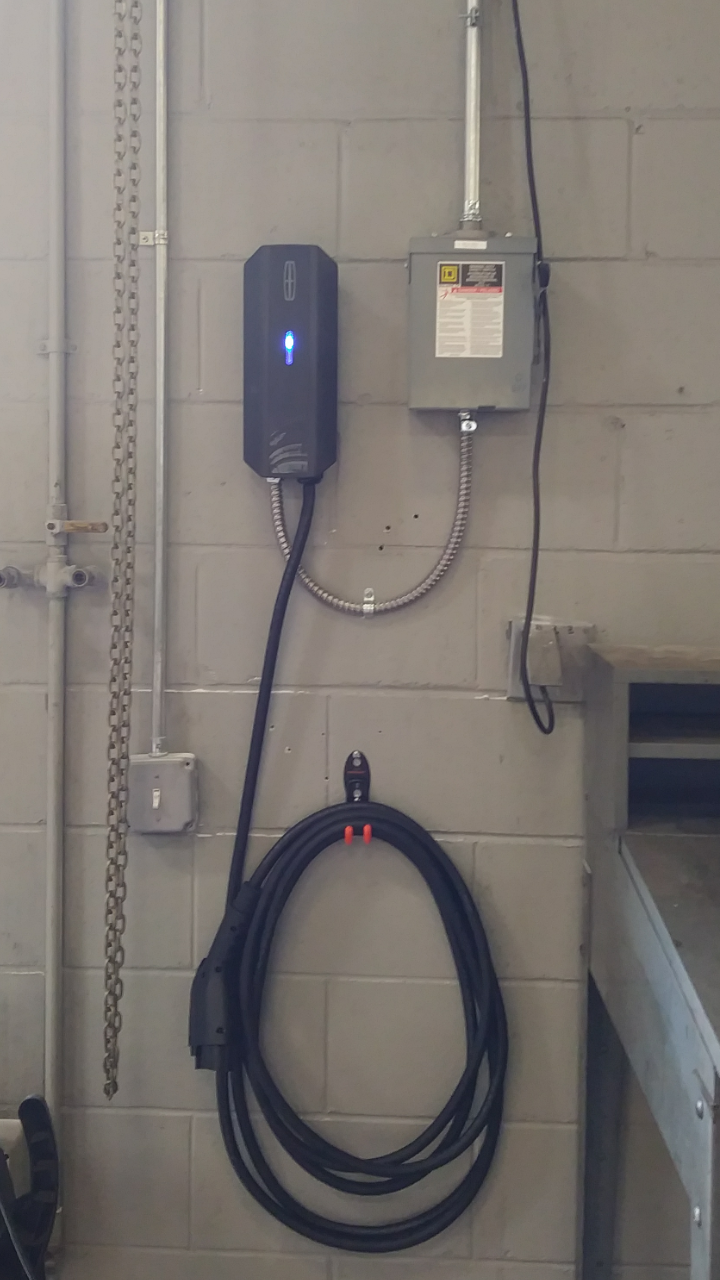 Done to the National Electric Code.

Get A Free  Estimate Today!

For the most accurate quote price on completing your project you will need to supply some important information and photos:

1.) A close-up picture of your electrical panel(s) so all the breakers are visible and picture of the room where your panel is located showing the adjacent walls and ceiling.

2.) Approximate distance from your panel to the final charger/plug destination.

3.) Picture(s) of the area you want the E.V. charger/plug located.

Email this information directly to HAVEPOWER and don’t be surprised at quality work at fair prices.

My name is Andrew, a second-generation native of Northern VA, McLean. I have been professionally installing E.V. chargers as an electrician since 2017 with HavePower–the Washington D.C. Area’s top Tesla recommended installer–and have focused in this niche electrical installation as a state-licensed Journeyman electrician.

Do you take shortcuts in your work?

My #1 rule is to do all work according to code (the National Electric Code) and meet all standards in material and workmanship for each job. I was trained under several master electricians and do work with high integrity as well going above and beyond in being aesthetically pleasing in every job. This is possible because I enjoy my work.

How does the finished work look ?

If you have seen the pictures above then you would agree it looks nice and neat. Unless your charger will be recessed in the wall, the running of conduit is a skilled craft, which is  what is means to ‘bend pipe’. Where wire is being run in exposed areas, Electrical Metalic Tubing is light-weight steel pipe particular to these electrical installations. In the end, it looks sleek and professional that allows having your charger exactly where you want it.

What is the process?

After your submit your pictures via email I will reply with an estimate. If the job is very straightforward and you accept the quote price then I’ll get the job done on the first visit. If the job looks more detailed and specialized (particularly with panels on the other side of the house) then I will make a visit for a visual and final estimate.

The recommended home charging installation for Tesla vehicles is a 240 volt NEMA 14- 50 or NEMA 6-50 outlet. (I suggest the Nema 6-50 over the Nema 14-50). This will be your cheapest and most cost-effective option with a max charge rate of 40amps on a 50amp breaker. Most Tesla Model 3’s only charge up to 32amps. Getting a HWPC will cost you between $500-600 and can charge at 48amps. The Tesla Wall Connector is fully weatherproof.  Any NEMA outlet placed outdoors it will require a weatherproof enclosure such as an RV Box.

Where should I place my charger or Nema Outlet?

For practicality, you should have it nearest the charge port where the car will be parked. For Tesla’s that’s located at the far end of the driver’s side. Also, If you are getting a Tesla Wall Connector keep in mind there is the short 8 foot version an the 24 foot long version. Proper planning with the short version is a must because you only have 6 feet or so of usable cord, so having it right near your driver’s-side rear bumper is the only option. When in doubt get the long cord.

What if my main electrical panel is full and I don't have the capacity or space to add another large circuit to charge my car?

It all depends on what you currently have loaded in your panel if you are already at capacity (meaning adding an E.V. circuit would put you over capacity). Once you send in pictures it can be determined.

A “heavy-up” (a total service upgrade) is acommon occurrence for those with already full electrical panels with less-than 200amps of electrical service coming into their homes (200amps is now considered the norm). Many older homes are not yet updated from years ago when 100 to 150amps was all a house needed. In such a case, adding a new double-spaced 240volt 2-pole breaker breaker in your panel at 50amps or more to run your E.V. charger would likely put you over capacity. Such a case, this would require a ‘heavy up’, which means to upgrading to a new electrical panel as well as upgrading your outside Service Entrance Cable (the cable that feeds your panel) so that can handle the increased amperage. This is the most expensive option but also the most thorough for future proofing your entire home’s electrical requirement for years to come

However, just because your panel is full doesn’t necessarily mean you need  known as a “heavy up”. It could be an easy (and cheapest) option to replace some of your current breakers with tandem breakers to make room for the larger needed double-pole breakers for your E.V. charging. Another option could mean adding a sub-panel next to your main panel to make room in your main panel for the E.V. breaker and other breakers in the future, which is a great option and much cheaper than a heavy up. However, all must be determined based on what is going on in your panel.

If you cut holes in the drywall will you repair it too?

II don’t perform drywall repair and patching. You will need to find someone to patch it or you can alternatively purchase spring-loaded ‘access panels’ at home depot to fit over the holes, which are usually sold in the plumbing section. I try to cut the drywall as neatly and squarely as possible and return the pieces to their respective holes.

“A fantastic job  from the basement and into the left side of our garage where the charger is now located.  I Don’t know how it was done so effortlessly. Great quality, looks sharp!”

“Yes I would recommend Andrew for installing electric car chargers. He knows what he is doing and takes pride in his work. Plus it was the best price among others.” Becka, S.

Since this is a niche area of skilled work, few electricians have this particular experience under their belt. Few, I would bet, would be as competent and efficient as I with executing the best pathway from your panel to the final destination.

Proper tools and methods assist in making for a fantastic looking finished piece of work.